Drupal Camp London is considered to be one of the biggest camps in Europe (if not the biggest!) Did it manage to meet the expectations this year? What are the latest discoveries, fresh ideas, useful learnings?

A few weeks ago we agreed on collaboration with Drupalcamp London and to join forces and focus on results for Drupal businesses. One of the main goals co-operating on the CXO events and to connecting these so that we can create a link between Drupalcamp London, the European Drupal Business Days Frankfurt, and Drupalcon Vienna and to produce results beyond each event, which we can carry on and develop from event to event. These might be business initiatives like industry reports, best practice guides, Drupal Accelerator / Fund and others.

What is DrupalCamp London and when was it?

The 3-day event has connected, engaged and inspired both Drupal gurus and newbies through a program of sessions, keynotes, presentations, code sprints, breakout rooms, training and a full Drupal CXO Day.

Drupal Camp London 2017 took place on the weekend of the 3-5th March 2017 and was hosted by City University London.

They are not so smart as you think.

The DCLondon 2017 was opened with the “stupidity paradox” “caused” by Andre Spicer.

Who is Andre Spicer? 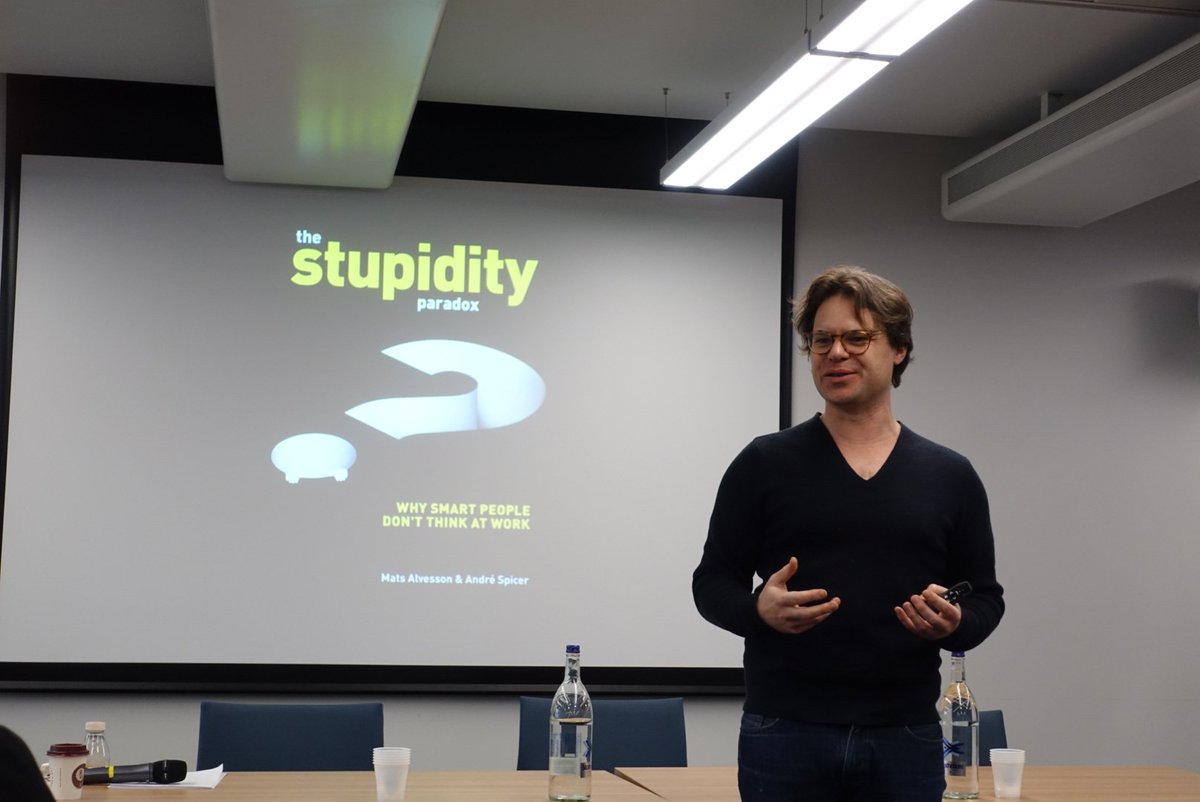 The father of the “stupidity paradox” is a professor of Organisational Behaviour at Cass Business School City, University London

He enlightened the audience about why smart people don’t think at work.

Solution: How to defeat stupidity?

The closing keynote of the day was given by Sarah Wood - the founder of a video and tech firm Unruly.

What does it take to make a video go viral?

Sarah Wood shared two key components to make a video content successful. Firstly, it should be attention-grabbing. It could be inspiring, hilarious, thought-provoking, mind-blowing, etc. Secondly, it should be perception-changing. It is not enough to trigger a certain emotions and should evoke a certain motivation for doing something with that feeling. Sarah Wood reminded us that it’s pointless to cry over the spilled milk or think of all your “coulds”. The best thing that we can do is to make the best out of our present and future. 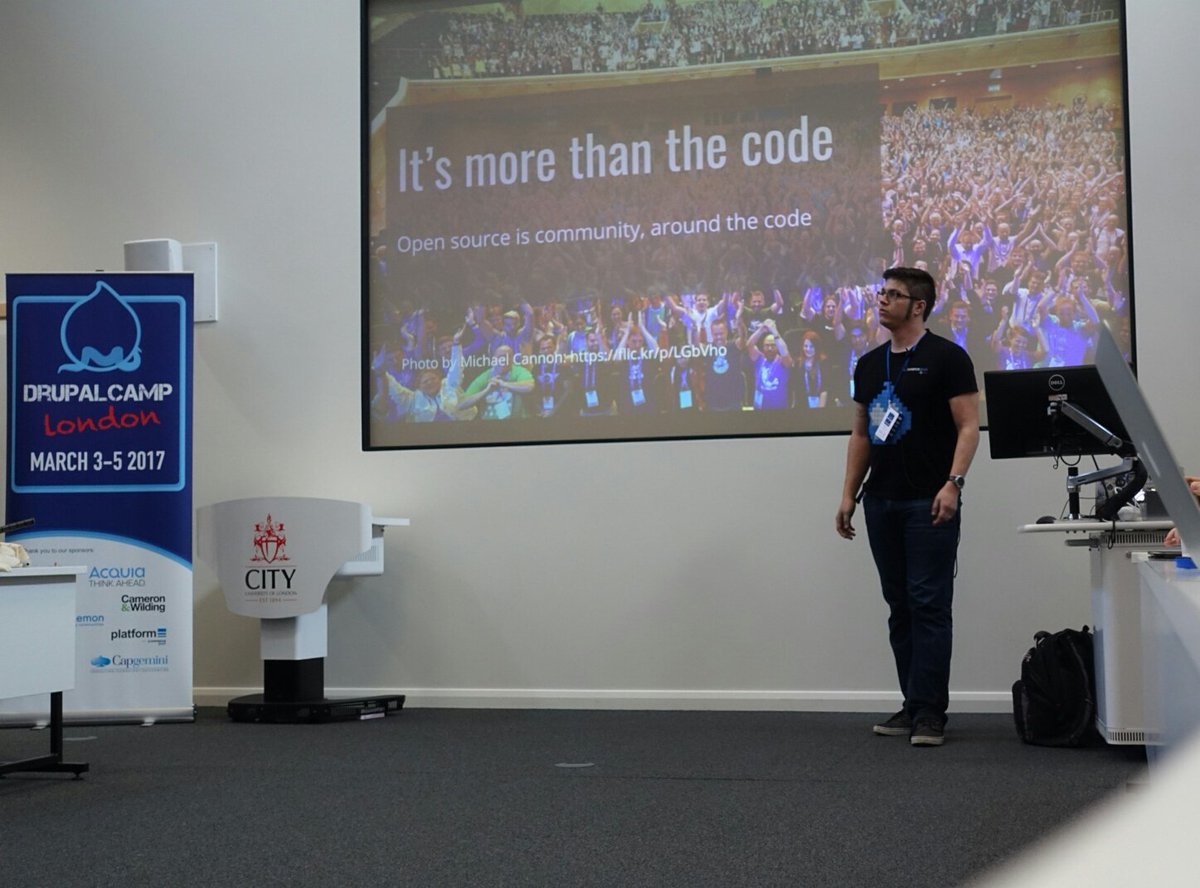 Matt Glaman is a developer at Commerce Guys. He is an open source developer who has been working with Drupal since 2013. He is the author of the Drupal 8 Development Cookbook and maintainer of ContribKanban.com.

Check out what he tweets about: @nmdmatt

“From delivering beers to speaking in London in just 5 years!”

Benefits of the community:

Why community matters? It makes it easier to solve harder problems;

It’s more than the code as coding something social.

On the second day, there was also a BoF about "Drupal Business Initiatives" and one of the key discussions during the BoF was evolving around development cooperation between Drupal oriented companies. Therefore several Drupal companies started to draft an initiative that manages and synchronises common interests and development efforts. Further meetings are planned during the CxO day at the European Drupal Business Days in Frankfurt this May. Want to join? A good start is the "Drupal Business" Slack Group - contact us if you need an invitation.

Why no one needs a website nowadays? Why, Jam, tell me why? 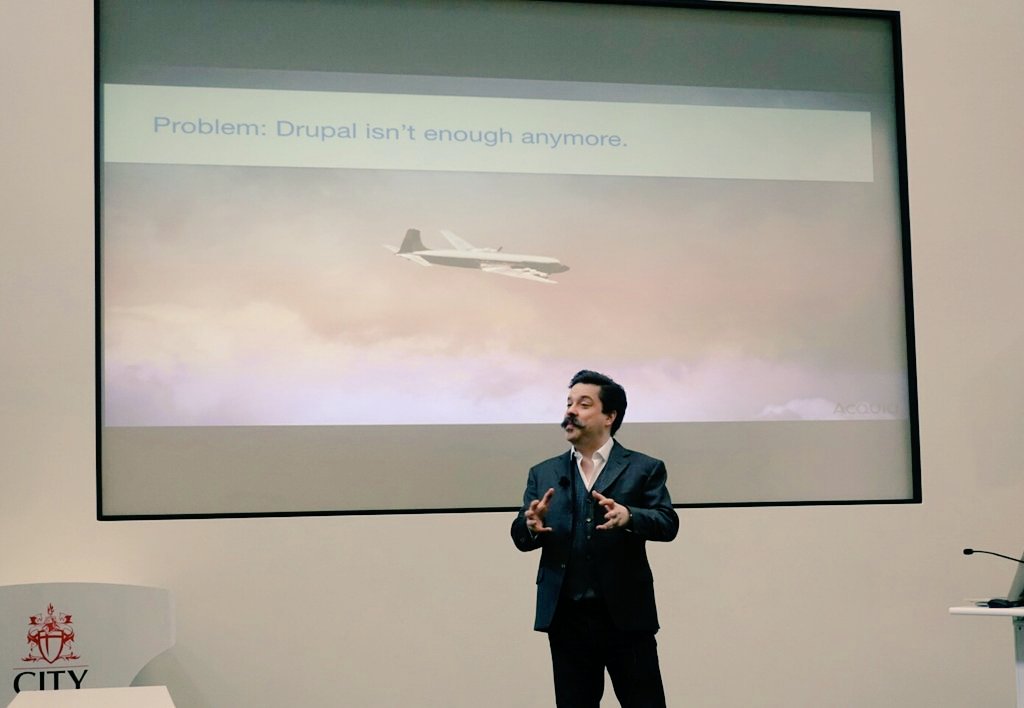 Jeffrey A. "jam" McGuire—Evangelist, Developer Relations at Acquia—is a memorable and charismatic communicator with a strong following at the intersection of open source software, business, and culture. He is a frequent keynote speaker at events around the world. He writes and talks about technology, community, and more on weekly podcasts and as a blogger on dev.acquia.com. This all helps satisfy his inner diva, which he also feeds with performances as a storyteller and musician.

Find out what Jam tweets about: @horncologne

“Jam” has stated that fact that clients don’t need simply a website, they want more, they want you to help them think. For doing that he recommends to implement in your work the principles of Golden Circle and start with “WHY”. 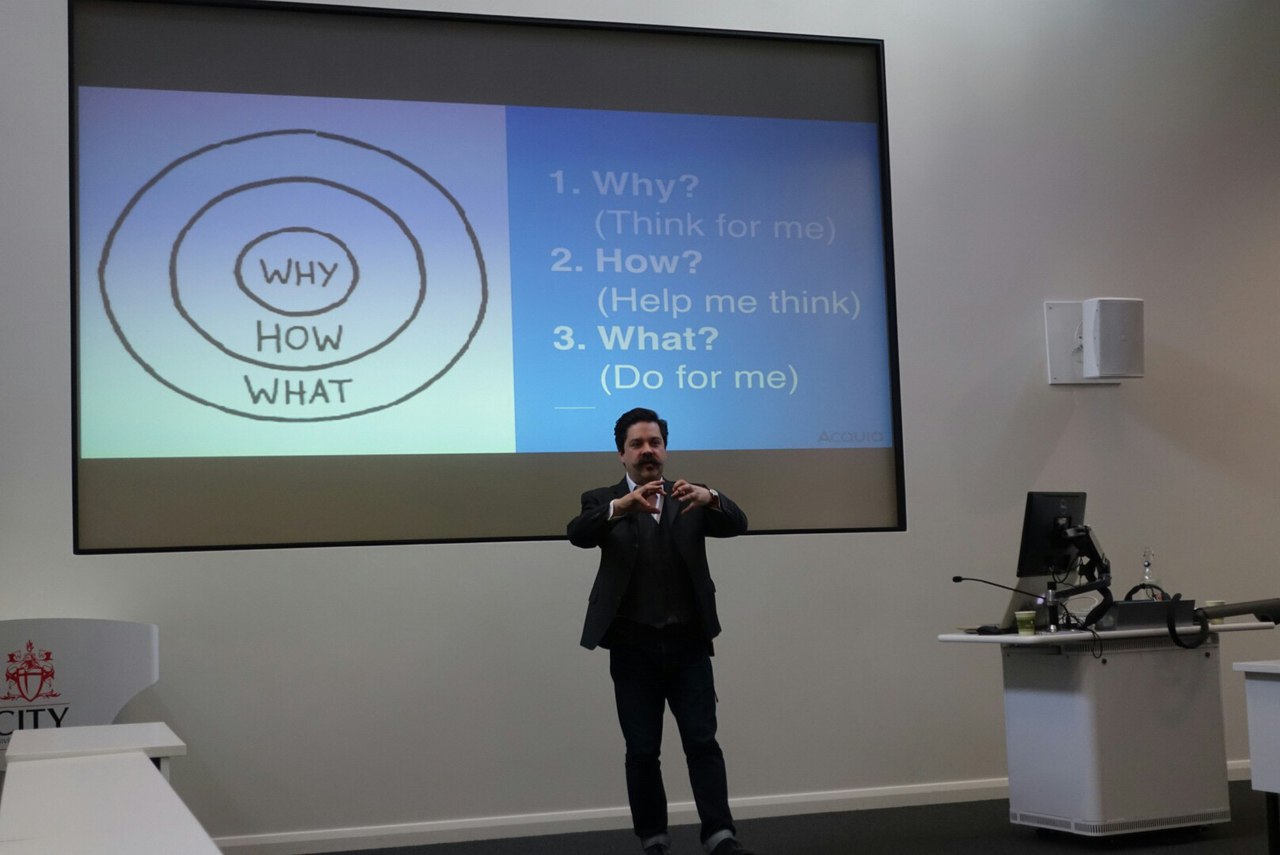 “Drupal isn’t enough anymore. Move up to the value-add chain.”

‘Empathy-Driven Content Strategy’ explores the transformation in content consumption, purpose, generation and how it impacts us. Looking at how empathy, touch points, sentiment analysis and emotional intelligence can be harnessed to create richer, more personalised experiences for people. 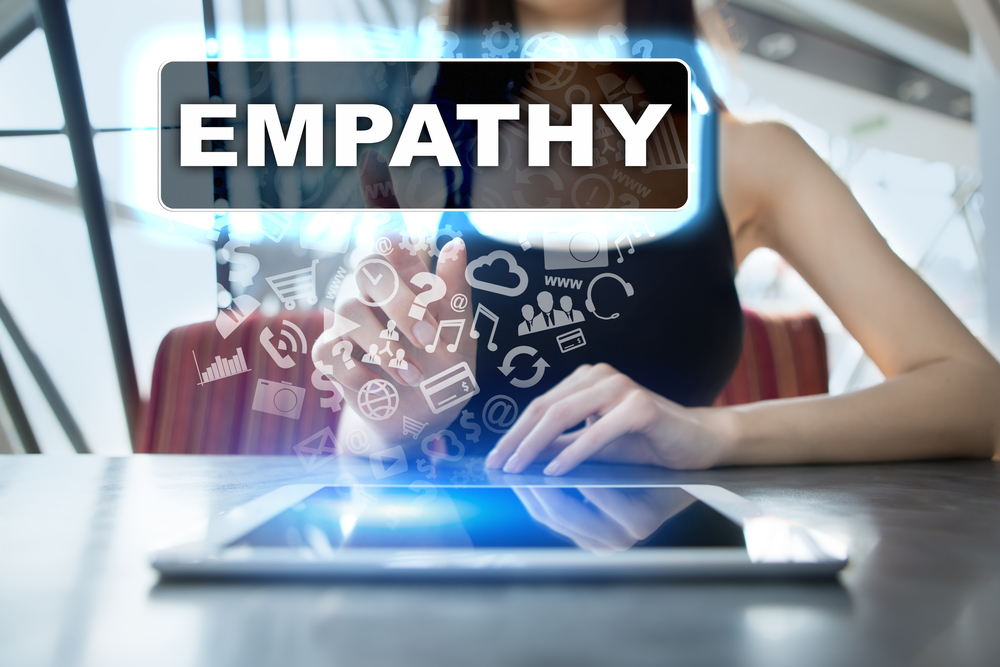 In his presentation, Kubair Shirazee introduced the audience to persona-centric, empathy-driven omnichannel content strategy - in plain English personalised consistent content that nails it for the consumer. Explore more in the publication and the presentation. One of the key topics at the European Drupal Business Days in Frankfurt will be "The Future of Brand Communication" - register now and learn how new technologies will shape brand communication.

The last, but not the least was a closing keynote by Danese Cooper also known as an Open Source Diva. Danese has been involved with open source since 1999. Currently she is a chairwoman of the Node.js Foundation. She also works in an open source role at PayPal.

The speech included the overview of the development of open source, the pioneers and influencers: Larry Wall (Perl), Ian Murdock (Debian), Mitchell Baker (Mozilla), the current state of open source and possible way of development.

It’s essential to have different people involved in an open source project. What will happen if we won’t “take care” of the Drupal community? Explore in the article written by Josh Berkus “How to destroy a community” and referred by Danese. After all, open source is not about technology; it is about the people behind it. 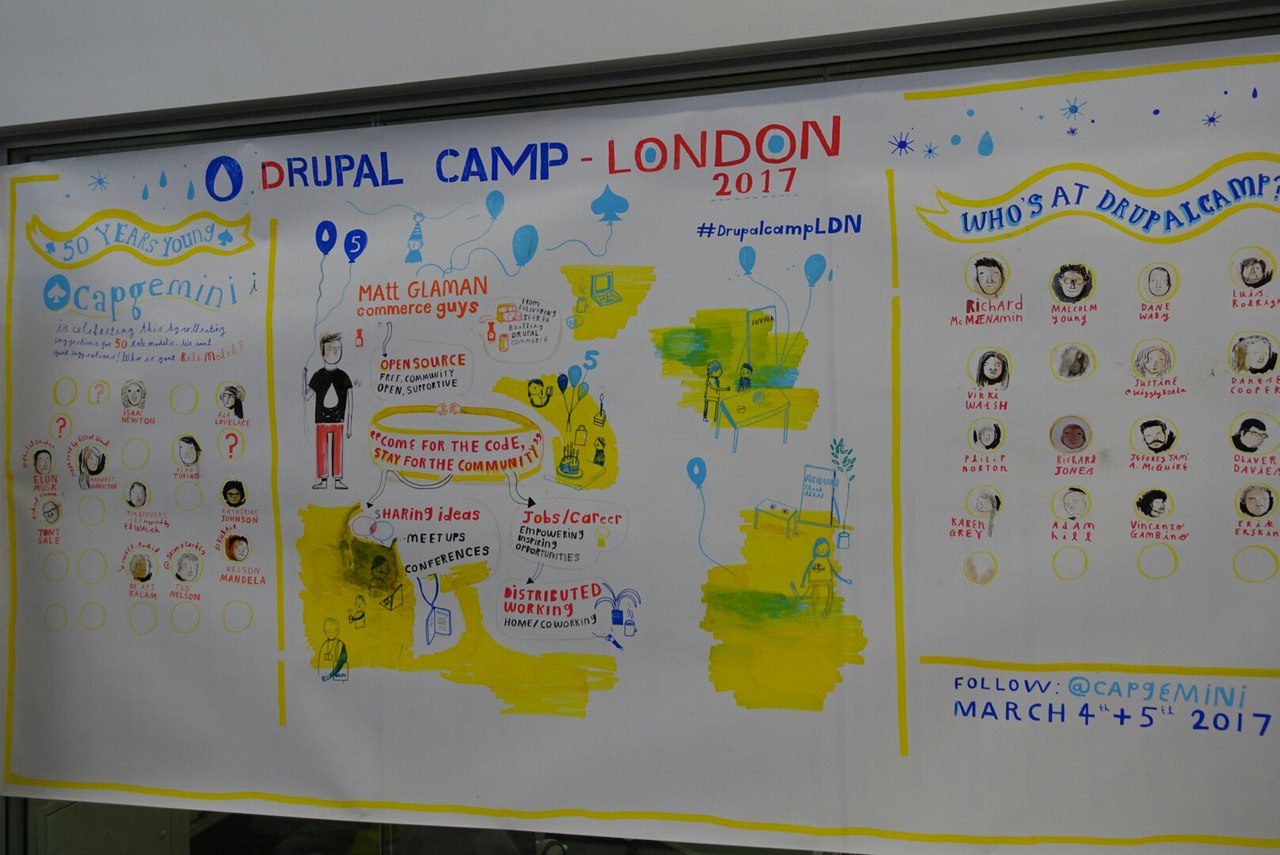 Big thanks to all the organisers for devoting their time and energy, the volunteers for helping out and the sponsors for providing the fresh food and tasty drinks, great venue, loads of interesting as well as useful giveaways (T-shirts, eco-bags, etc.) There was even an opportunity to win a bottle of Moet & Chandon Grand Vintage Champagne 2006!

By the way, it has already been the 5-th anniversary since the beginning of the Drupal Camp London. Due to such a special occasion, there was a special surprise - the huge cake. 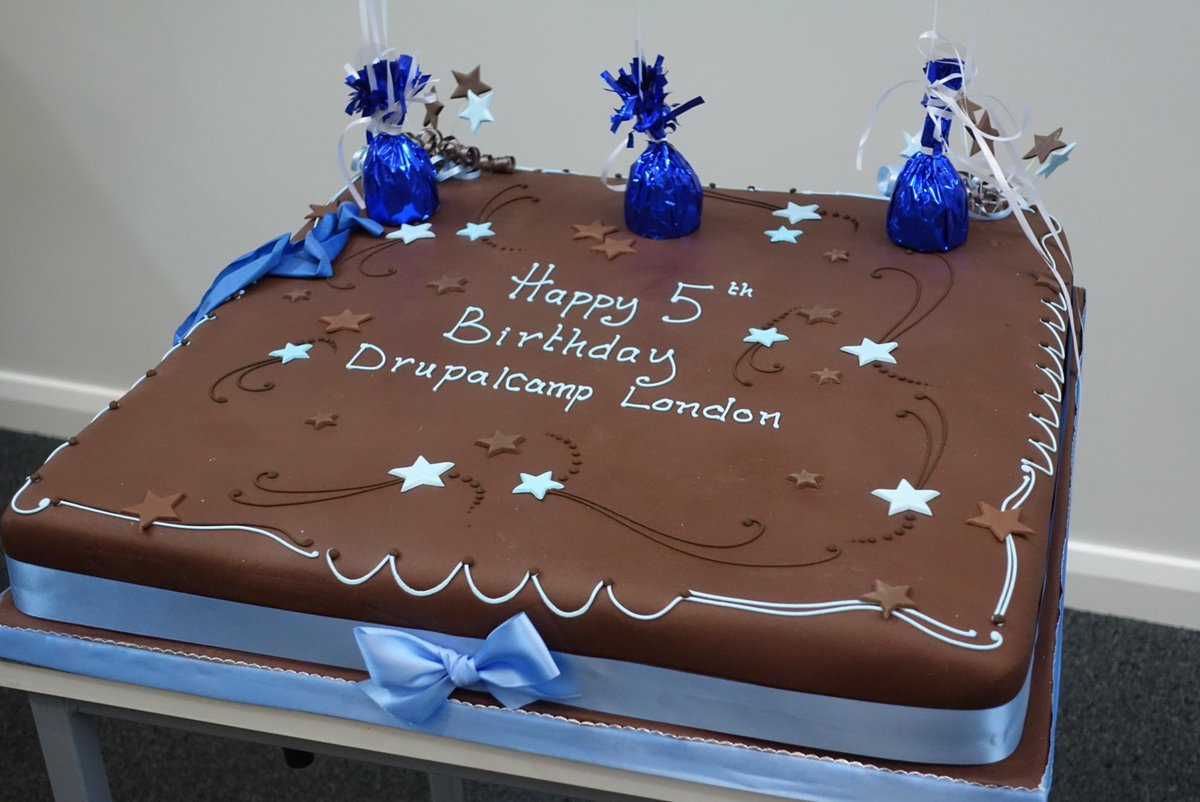 Use the hashtags #DCLondon #DCCxO and find more tweets and news from Drupal Camp London 2017.

Looking for the next big thing? Wondering where how to meet all the makers, shakes, and doers under one roof?

Join Drupal Business Days Frankfurt 2017 and benefit from the unique opportunity to meet business, delivery and marketing managers as well as executives and decision-makers from the companies that are end users of Drupal.

The central question will be: What’s the future of technology and communication?

Interested? Check out the official website, get your ticket and embrace the vibe of the inspiring city.